Costume Ideas #5 – And the Band Begins to Play

This is one of those cases where something reminded me of another article of clothing, and despite my furious searching, I’ve had to accept that it was just one of those weird mental links.

This dress made me think of Yellow Submarine (the Beatles’ cartoon). I don’t think anyone – John, Paul, Ringo, George, or any of the Blue Meanies – wore a flag team dress. And yet, my first thought was, “This was in ‘Yellow Submarine.’” 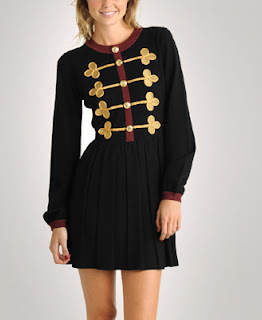 The website claims that, “the overall look is pulled together with a contrast ribbed binding,” which I would argue is kind of a damned lie, since there’s no way this look ends up being pulled together. “Thrown together in Home Ec,” yes. “Pulled together,” not so much.

The thing is, I don’t hate this dress. I really like the shape of the skirt and the torso. It’s not even the overall detailing – even if they kept the button placket on, I would like it. But I don’t like the gold military design, partly because it would look weird on me and partly because I think it looks crazy cheap. It makes the dress cross over into why it falls into Halloween Costume territory – it looks like what you’d buy from Aahs! to wear if you and some friends wanted to dress up as band geeks. Not slutty band geeks. Just plain old boring band geeks.