If this were made by a high-end designer, it would not have shown up on this site. 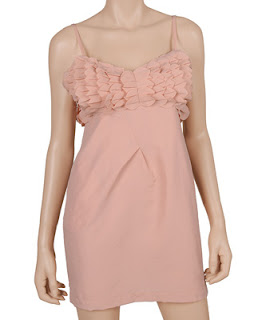 First of all, because the fabric and quality of the garment would probably be higher, and as a result it wouldn’t look cheap. One would hope, anyway.

But second of all, because I’m guessing there’d be more to the dress than just some random petals thrown on the bustline. I actually don’t hate the idea – granted, I wouldn’t wear it, because the last thing I need to do is add more volume to my chest. However, on a girl with a different shape, it could work.

But that’s it. After the petals on the bust, the dress turns right back into a very, very boring tank dress. I’d almost rather see the whole dress have that petal pattern on it, just for the sake of interest. Because once you move past the bustline, this dress is remarkably boring. And that, beyond all else, is the worst thing you can do with clothes. At least if it’s hideous, some effort and creativity probably went into it. But if it’s boring? That’s just laziness.