Sock It To Me

I am all for quirky socks. I went through a big phase in college of wearing socks with different patterns and images, after my roommate’s mom bought them for her, but then she didn’t want them. So for freshman year, I wore socks that could coordinate with zoo trips, holidays, and my mood. It was great. My favorite ones were covered in frogs. I don’t know why. It might have been the lack of sleep, but I found them wildly amusing. 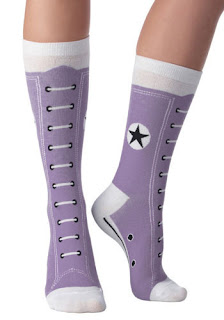 These, not so much. I guess it’s because I already wear low-tops most days (at one point, my collection was up to 8 pairs but I’ve since had to weed it down after recognizing that I had a problem).

So I’m all for quirky, but do you really need socks that look like shoes? 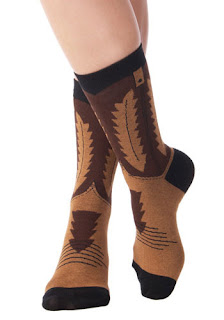 Or worse, cowboy boots? The quirky is just so … forced. It’s like something that a character played by Zooey Deschanel would wear while dancing around in a vintage dress with her giant doe eyes, being all manic and pixie-ish. She’d say something about how she loves wearing socks that look like shoes, because then it’s like she’s wearing a second pair of shoes that only she knows about. And then she’d give a big twee smile and start talking about the Smiths as if they’re some obscure band that only she knows about. Then legions of hipster boys would swoon, and the manic pixie dreamgirl would continue her reign of terror.