Occasionally, Modcloth shoots for “Parisian chic.” In this case, I’d say they overshot. 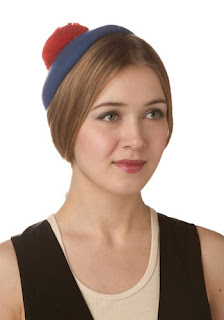 I mean, yes, my first thought was “French” when I saw this. but not in the good way. I thought “French” in the, “that’s the kind of hat someone would design if they were aiming for ‘French’ but missed,” kind of way. It’s just comical in its not-Frenchness.

Even the Hardest Working Hat Model at ModCloth seems bemused. I wonder if she’s thinking “I’m wearing a yarmulke with a pom-pom on the top.”

Oh, and it’s $73, and the way that it secures is with an elastic band. It’s appealing, non?