My first thought about this dress was that it wasn’t particularly flattering on the model. I was more than happy, though, to move on, leaving be the dress, its hip-widening powers, and the poor model. 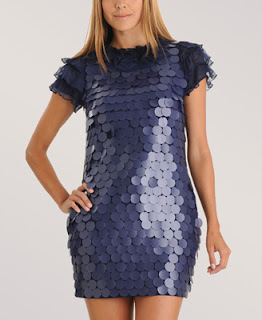 Then, I saw that it came in another color combination. 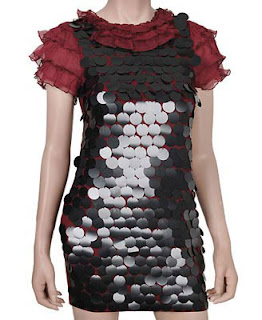 I’m sorry, but what the hell were they thinking? Giant black pailletes with massive red ruffled sleeves and a ruffled neckline? Who would this be flattering on? Sorry, let me rephrase that: is there anyone out there who could wear this dress without looking like a linebacker? Because I really, really don’t see that happening.

Oh, and the pailletes don’t even go all the way around, so they’re just kind of a big sparkly smock. 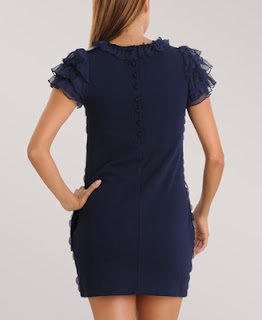 Which, on the blue, isn’t too bad. But imagine that on the red. You have giant black discs on the front, but on the back, just the remnants of the massive ruffles. I’m sure pailletes aren’t particularly expensive, and I doubt that this is carefully hand-crafted. Would it have been so difficult for them to continue the pailletes to the back, just for the sake of continuity?