Clearly, I don’t get the kids of today. 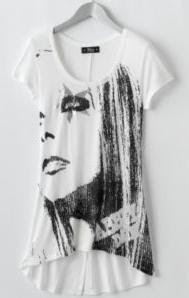 If I did, maybe I would understand why you would wear Avril Lavigne’s giant face on a t-shirt. Or, if I understood kids today, the KISS-style star over her eye would make sense.

“Dare to be different. You’ll steal the spotlight wearing this juniors’ Abbey Dawn boyfriend tee,” says the website. I can’t really argue with either of those points. After all, it certainly would be different to wear a t-shirt with Avril Lavigne’s giant face on it, given that her whole “punk rock” look hasn’t really been new or fresh since 2002. And you will steal the spotlight, as people try to figure out just whose face you’re wearing, since it’s only identifiable as Avril because it’s her own clothing line. I guess you could say she has a big head about herself.

The t-shirt is described as a “boyfriend tee,” but quite frankly, if you’ve stolen this shirt from your boyfriend, you two need to have a serious discussion.