The problem I’ve always had with Shelli Segal is that she tries really hard, and it shows. It always makes me kind of sad to see someone put in that kind of effort and consistently fail. It’s hard to really hold it against them. 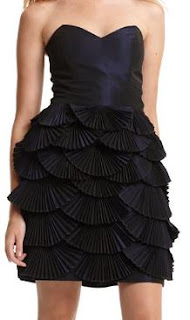 Behold, the fan dress. A dress where the skirt is decorated with those construction paper fans you would make in grade school. Looking at this skirt, I can’t help but imagine a sweatshop full of Hawthorne Elementary fourth graders, forced to make fans until their fingers bleed. 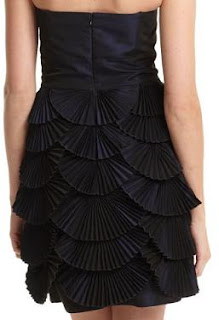 This could just be my wanting to throw Shelli a bone, but I don’t think I’d hate the dress if the back were a little longer than the front, and it only had fans in the back, like tail feathers. Of course, it could very well be that I would have posted that dress on here anyway, but in my head, it seems marginally better. 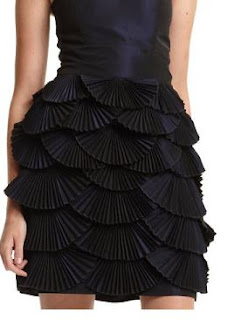 And even if she hadn’t gone full-plumage, she could have at the very least made the hemline match up with the fans to make a scalloped pattern, rather than having the fans just glued onto your standard skirt. But that’s the fatal flaw of this dress: she somehow manages to go all-out to the point of excess, while simultaneously not taking enough of a risk to actually make the dress interesting. So instead, you’re just left with a dress where the bottom half is covered in stiff, pointy-edged fans.