This dress was submitted by weather guru and blog promoter extraordinaire Nicole. Says she:

Something about the dress just seems off. I don’t know if it’s the piped waistline, or the fact that my eye is drawn to the gap in the collar and the plaid front panel, or the plaid itself (trade the red for green or yellow and it might have gone better, but I can’t say for sure). 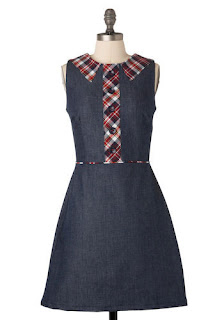 I’m going to try to be as objective as possible, despite being overlooked by the ModCloth Naming Committee. Clearly, the kind people at ModCloth just aren’t aware of this blog yet; otherwise, there’s no explanation for why this isn’t called the “You Want Me To Wear What? Dress”.

In fact, I think you should all email that suggestion to them.

Look, I love plaid. And I love denim. I do not, however, understand why designers continue to insist on pairing them in dress form.

Repeat after me: “Plaid is not an accent fabric.”

When you pair the two together, it doesn’t create a fashion-forward dress. It looks like something you got off a Kmart clearance rack from 1994. Maybe it’s just the way my mind works, but whenever I look at dresses like this, I immediately think of denim vests with little patches on it. It reminds me of something that Finn’s mom would wear. 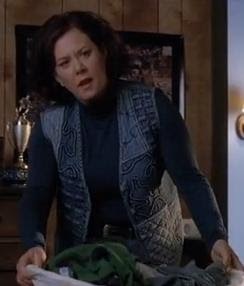 On a construction level, the collar seems way too small for the dress itself. I think I’d like it better if the collar were oversized, because at least then it would feel a little more vintage. Also, the strip of plaid running down the center doesn’t need to be that thick, unless you want to make your torso look wider. Otherwise, this dress bisects the body in a weird way that ends up making the whole thing look kind of frumpy, especially when accompanied by the extraneous piping along the waistline. 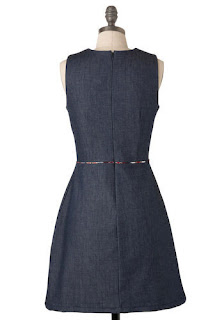 Also, the piping is the only detailing that is continued on the back of the dress. Look, I’m not a fan of the plaid collar, but if you’re going to have it, at least continue it all the way around, just for the visual symmetry. I think this is one of the rare cases where I would rather there be more plaid than less.

So, is this whole denim/plaid thing going to keep going through the season? Because it’s getting old, fast.