Part of me wants to like this skirt, purely for the fact that it’s … unusual. I know, a lot of the time, I post things on here that many people would wear, and it’s just that I tend to stick to very basic styles. So, in that respect, I really didn’t want to post this skirt. 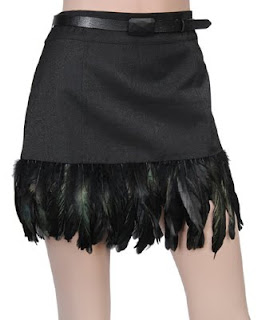 But then I started to think about the logistics. First and foremost, wouldn’t the feathers tickle your legs all night? It would drive me crazy, I’d always be thinking that something was brushing up against the back of my thigh. Plus, if you sit down wrong, one of the feathers could get bent, or they won’t wear well, and then you’ll have a skirt that looks like it’s molting.

But, more than anything, I think what I dislike about this skirt is that they seem to be randomly attached to the skirt. The skirt is a plain twill miniskirt. I don’t get where the feathers are coming from. Actually, glued to the inside like that, it kind of looks like you’re wearing a feather petticoat. That would be more logical than just gluing the feathers to the hem of the skirt. I don’t know what fabric I’d rather this be, but it just seems like a strange addition.

Actually, I think I’d like this skirt if they took off the feathers, but made the belt bigger. I could go for a large patent leather belt on a twill miniskirt. Or, if they’re insistent on keeping the feathers, it might have been interesting to have them be an actual color. I mean, if you’re going to wear feathers, you might as well wear bright yellow ones, right? Or hot pink. Yeah, I would probably give this skirt a pass if it had hot pink feathers, just for the sheer random audacity of it.