I’m currently in Santa Fe, indulging in my two other great loves: rocks and New Mexican food. It’s very cold at night, so I’ve had to dig out my cold weather gear, including my gloves. Yes, it’s a nuisance having to carry them around, and I’m constantly having to make sure I haven’t dropped one or gotten them dirty. 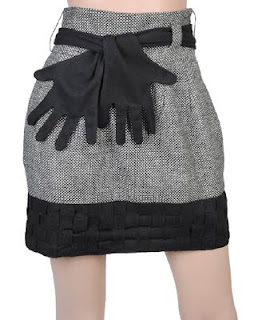 Despite all the difficulties posed by gloves, never once have I thought to myself, “Man, I wish I could wrap my gloves around my hips like a belt.” Nor have I thought, while buckling my belt, “This would be so much better if it looked like someone was groping my crotch.”

I’m just saying, these gloves are getting very fresh. I hope they at least bought the mannequin dinner first, because otherwise, they’re taking advantage of it.

I wonder if Forever 21 will be coming out with a matching top that would have two gloves grabbing the wearer’s breasts. At least then you wouldn’t have to worry about what matches the skirt you own – you know, the one that looks like it’s trying to steal third?