Alright, this has gone far enough. I know that kids today are all into Twilight and the tragic romance between a girl and the hunky vampire with sparkly skin who is torn between wanting to love her and wanting to eat her. I get it. 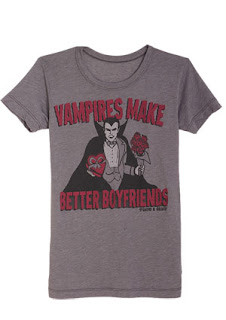 But seriously? No. Vampires make terrible boyfriends. Keep in mind, they’re constantly fighting the overwhelming urge to kill you. Because they are.

It’s the equivalent of if a lion started dating a gazelle. Yeah, at first he’d be buying the gazelle flowers and chocolates, but after a week or so, he’s going to get kind of hungry while they’re at that all-grass restaurant the gazelle loves so much, and he’s going to start picturing a giant steak where the gazelle is sitting. It’s only a matter of time before the lion is going all National Geographic on his gazelle-friend.

So, yeah, Vampires make the best boyfriends, if your criteria for good boyfriend includes “wants to consume me.” Never mind the fact that he can’t go out in the day time. Yeah, sure, sparkle-skin is great and all, but that’s fiction. Everyone knows that vampires can’t go into sunlight.

Also, they’re really old, so I’m sure you’d have to listen to a lot of “Back when I was human, we had to walk ten miles in the snow” and whatnot. And do you really want to have to explain how the internet works to your boyfriend?

Sure, vampires tend to be hunky (they apparently only like to turn the good-looking ones). And of course it’s flattering to be hit on by the undead. But let’s be honest here: they are not good boyfriends.

Unless you’re really into tragic romances, in which case, you’re 15, of course you are, go read Wuthering Heights and write in your LiveJournal about how no one understands you.