I have tried very, very hard to hate Jessica Simpson’s shoe and clothing line. I’ve actually made a concerted effort to not buy anything from them, because I hated the idea that a pop star had made a decent clothing line – and worse, that Joe Simpson could stand to profit from it. As a rule of thumb, I do not contribute to Joe Simpson’s coffers (by the by, apparently today is his birthday – happy birthday, Captain Creeps-Me-Out!).

And you know where that boycott has left me? Without a lot of cute shoes.

I know. I really don’t want it to be true, but the girl’s hired some great designers. When in a department store shoe section, I’ve consistently gravitated toward her shoes, realizing with dismay that the really cute concealed platform heels are Jessica Simpson’s, and therefore not allowed to come home with me.

Ultimately, though, I could live with that. I don’t wear heels all that often, so it’s not like I need that many. 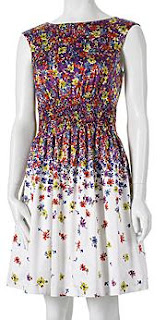 And some of them have a retro, Mad Men-esque silhouette. Like this one. Which is covered in tiny flowers. But not in an abrasive way. In a cute, springy, whimsical way. With a boatneck and a full skirt. 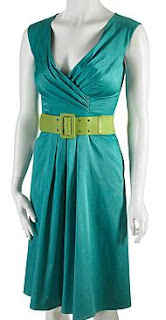 This dress could have gone so horribly awry – sea foam with a lime green belt. Who in their right mind would combine these two colors? And yet, it works. It works so hard, I’m already wearing this in my mind, and it is magical. I have no idea what shoes you would wear with this, but in my head, I have hemmed this to a few inches above the knee, and I am wearing a matching patent leather headband, and I might or might not actually be Blair Waldorf in my head. 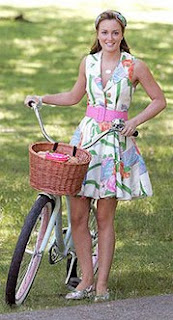 She’s wearing Alice & Olivia in both these pictures, but she could have just as easily been wearing the Jessica Simpson dress (if the JS dress were marked up a couple hundred dollars … the girl does have standards).

Remember how I mentioned the Mad Men silhouettes? Yeah. That.

It’s not quite as springy as the other two – it feels heavier, more appropriate for winter. But I love the sparse polka dots, and for once, the beaded neckline actually works for me.

So, fine, Jessica Simpson. You win. I may or may not be feverishly Googling “Jessica Simpson dresses what stores” right now (I don’t Google in coherent sentences). And damned if I won’t be trying on these dresses the minute I find out what stores carry them.

Just, please, can you give your dad’s 20% to whoever actually designed these? Because they deserve the bonus.