I can’t help it: I love Taylor Swift. Her music is ridiculously catchy, she’s got pretty hair, she’s eleven feet tall but wears high heels anyway, and she loves sparkley dresses. I might or might not have had a dream the other night that I was performing at a “We Are The World” kind of concert, and before going onstage, I told her to check out my blog because I’ve written about her.

Upon looking back, it turns out I’ve only mentioned her once, but whenever I write about sequins, I have her in mind.

Anyway, back on topic.

So, as I was saying, I can’t help but like Taylor Swift. I’ve tried, because my heart is a cold, dark wasteland. 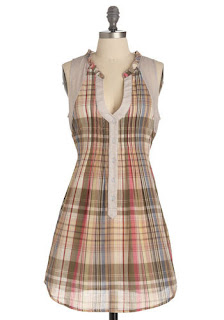 I appreciate that ModCloth has named a dress after Taylor Swift (although, seriously, where’s the dress named after my blog? I’m waiting …). And I can sort of understand their thought process: she is a country/pop singer, so it’s not totally illogical that they went with plaid for the name. I’m not a fan of the dress itself, but had they used this fabric for a pair of shorts or a button-down, I would have really liked the fabric and ignored it completely.

And on that note: