Walking Around On Those – What Do You Call Them? 2

This was sent in by Emily (not to be confused with reader Little Emily). Says Emily:

“I know this is ugly, but the white version it reminds me of the little mermaid – Ariel’s dress right after she gets legs, and the shapeless sheet she’s wrapped around herself becomes a kind of cute minidress. Magic! Please make fun of it so I don’t buy it.” 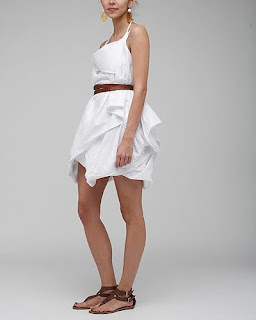 I kind of remembered that Ariel wore a white dress at some point, but did not have nearly the photographic recall that Emily showed. But, once I found the screencaps, it all came flooding back to me. 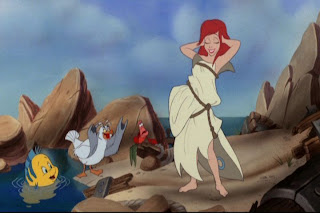 Ah yes. The white sheet dress. Worn with the kind of pride that screams, “Up until now, the only clothing I’ve worn was a shell bra.” 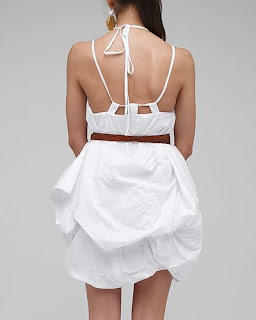 But damned if this isn’t the same dress. Look at how randomly bunched it is! Do you know why it’s gathered into a bustle? Because I sure don’t. The only thing I can think of is that the designer was aided by his friends, a confused seagull and a smarmy crab.

From the side, I actually like the dress. It’s so sculpted that it actually becomes appealing. 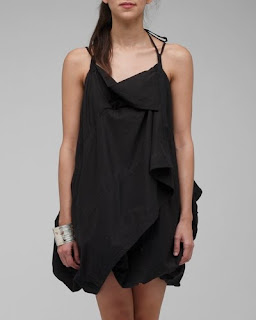 But then you get to the back, and it suddenly just is a lot of lumpy volume. Or there’s the front, which demands a belt to temper its shapelessness. And while I wear a lot of short skirts, I’d constantly be tugging it down, because it’s always harder to tell if you’re flashing the world when you’re wearing an uneven hem. 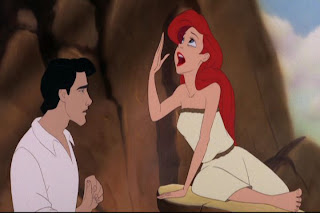 On the other hand, if it lands me a hunk like Eric, then I’ll throw down the $105 for a couture sheet of my very own. And I wouldn’t even need to trade my voice for legs – not a bad deal.

Of course, he seemed to like the fact that she didn’t talk, so my feminist sensibilities are incensed. Will they win out over a childhood crush?

Maybe I’ll see if the Beast is still available. And if he’ll cut that mullet.

2 thoughts on “Walking Around On Those – What Do You Call Them?”