According to ModCloth, “Named for the actress who played Kelly Kapowski in Saved By the Bell and Valerie Malone in Beverly Hills 90210, this arresting, floral print mini dress by MinkPink makes us long for a 90′s fashion renaissance!” 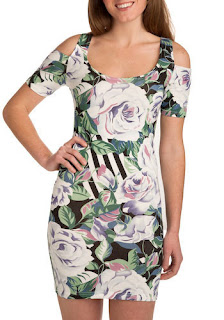 I’m so torn. On the one hand, I have become obsessed with flannel shirts of late, and if not for the fact that I don’t have the closet space, I’d buy a pair or two of Docs. After all, we’re shaped by the fashions we grew up with, aren’t we? God knows, I still consider Alex Mack and Clarissa to be the queens of chic.

But, by the same token, oh my god, the 90s renaissance makes feel so old. I went into Wet Seal the other day, and I swear the clothes were the same as when I first started shopping there. And floral patterns are so overwhelmingly busy. Those are some giant flowers. You can’t even tell if the dress is flattering or not, because there’s so much going on. Which, yes, is the risk of any pattern, but for some reason, overwhelming floral patterns in particular bother me.

I guess that’s my problem with the 90s renaissance – much like with the 80s renaissance, or the 70s, or any plundering of a prior time period by designers – they bring back the tacky. And I don’t understand why, other than because they hate us. Because while yes, a floral pattern can work on a floaty skirt, on a skintight dress, it’s just … we made this mistake once already. Do we have to keep repeating it?