Every so often, I remember with horror that the 90s were 10 years ago. This is horrifying to me because I’m starting to understand why my dad regularly says, of classic rock songs, “Doesn’t this sound like it could have been made this year?” When I was younger, I would often agree so as to not be a terrible child. But now, I actually get it, because “Genie In a Bottle” is almost eleven years old. And that is, at best, unnerving.

So, if you’re feeling nostalgic this Halloween, why not go as Christina Aguilera from the video? Anthropologie’s made it a lot easier for everyone by selling these bright orange, totally wearable pants, for a perfectly reasonable price of $78.

Sure, it’s a little expensive for a pair of orange cotton pants, but really – what wouldn’t you pay to look this cool while singing thinly veiled euphemisms for a dude groping you while dancing? 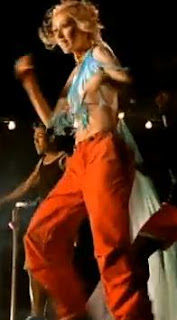 One comment on “Costume Idea #18: And Now It’s Stuck In Your Head”