I’ve had six episodes of Greek sitting on my DVR until this week, when my boyfriend went out of town and I was able to catch up without torturing him. Don’t be mistaken – if you haven’t watched Greek, you should be. It’s great. It’s genuinely entertaining, more so than any major network drama. It nearly drove me to rush a sorority this semester, and I’m a 24 year old grad student.

Back to the clothes.

It was one of those serendipitous moments, then, that I was surfing the ShopBop website, and no sooner had I found this dress than a character walked on screen wearing it. 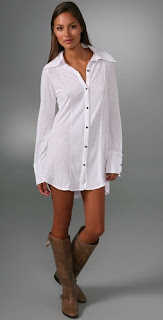 Only, she wasn’t actually wearing this dress. She was just wearing a giant men’s shirt, in a painfully awkward seduction attempt.

The ShopBop website claims this is “a comfy version of the shirtdress,” but I’m pretty sure that if you wore this outside, it would look less like a breezy, casual dress, and more like you’re doing the most epically pantsless Walk of Shame in the history of Walks of Shame. The boots the model is wearing add to this effect – doesn’t it seem like they belong with some other outfit that got lost in the haze of too many tequila shots?

Well, either that, or she just weathered dozens of hit men descending on her house after she’s just reconciled with her assassin husband. 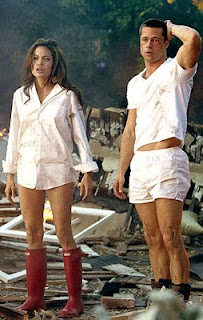