I am not ashamed to admit it. 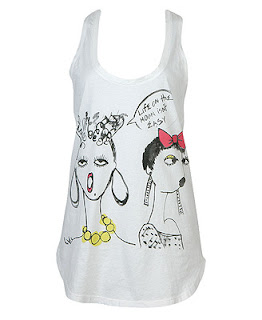 I do not understand this tank top. I’m completely lost. I’ve even googled the phrase “Life on the moon isn’t easy,” but nothing came up. What the hell does it mean?

I feel like I’m looking at a New Yorker cartoon. That’s how confused I am.

Why do these women not have eyebrows or noses? Why are they talking about how hard it is to live on the moon? Do they live on the moon? Are they considering moving to the moon? What makes living on the moon hard? Is it the lack of atmosphere and weak gravitational pull? The absence of water? The fact that it’s a three day commute to get to the nearest mall? Is there a high crime rate on the moon? Is the unemployment rate on the moon skyrocketing? Are you bored of the amusement park?

I’m not arguing that living on the moon isn’t hard, but that’s mostly because, as far as I’m aware, one cannot live on the moon. Since, apparently, these women are having a discussion about it, the situation must not be as cut and dry as I imagined.

I’d like a follow-up tank, one that gives this one a little more context. Maybe a response from the other girl along the lines of, “Yeah, ever since the moon’s currency weakened, it’s been almost impossible to find jobs.” Or, “Well, sure, because space suits make my hips look fat.” I’ll take pretty much anything, as long as it’s an answer.