This was submitted by Irene L. over on the Facebook fan page. 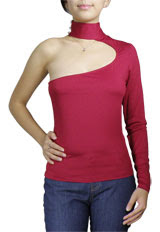 I get that this is probably “club wear,” which falls into a whole other category of things I wouldn’t wear, and I’m sure it’s considered the height of stylishness at raves or something.

As a non-rave attending layperson, though, my thoughts on the top aren’t particularly positive. Initially, I thought that the top reminded me of something an alien would wear on Star Trek. I think it’s the neck collar.

But, the more I stared at it, the more concerned I became for the health and safety of the model, as it appeared the top was rebelling against the wearer and choking her. It kind of looks like the sleeve is reaching up and throttling the model, right?

Well, even if I were one to wear clubwear (which I’m not, since the dress code for studying geology and sitting around my apartment is casual), I’d still steer clear of this top … just to be safe.