What? Don’t judge me, they had hot wings for 50 cents each, giving you a bucket of tasty for under $6.

Right. Anyway. So I’ve been going through an “I should cook!” phase, which mostly entailed my surfing through cooking blogs looking for macaron recipes. Then I stumbled upon a blog called Cupcakes and Cashmere.

Apparently I’m the last person on the internet to find this, as it recently won the 2010 Bloggies for Best Fashion Blog. And it really is amazing – gorgeous photographs of food and of pretty, pretty clothing. The kind of clothes that you see and want to buy, despite the fact that the price is more Barney’s than Forever 21.

What sold me on the blog, though, was a series of pictures of the writer in this dress: 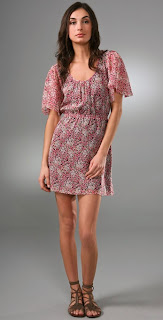 She actually styled it better than the good folks at ShopBop, which is no small feat. I stared at these pictures for at least five minutes before finally deciding: I must have this dress. I must. 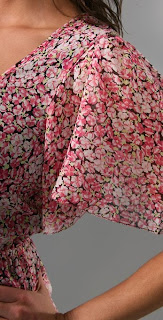 It’s flowy! It’s girly! I can walk through the streets of LA in something other than a scoop-neck t-shirt, jeans, and Converse! I can go shopping on Robertson! This dress, I decided, would change my life. Upon wearing it, I would become stylish, fashionable, chic.

So I went to Madewell in Century City. It opened a few years ago, but I’ve always passed it by. Their window styling isn’t particularly impressive, and glancing in, I never saw anything that really grabbed my eye.

It’s not often I realize I’ve made a terrible fashion mistake. The last one was my prom dress, back before I realized that pastels are not my palette. But not having visited Madewell sooner … that now ranks up there in my list of fashion mistakes.

I tried on, no joke, 15 dresses and tops. I bought a couple dresses – one of them was the floral dress above, the other was this dress:

The fabric is soft and malleable and flowy. The cut’s great. But no matter how many times the girls working in the store told me the dresses were great for girls “who are, y’know, big on top,” it just doesn’t work for me. I think the waist isn’t cut high enough, so the dress just has a lot of excess fabric between my chest and my waist.

Either way, these dresses are going back to the store, but I hope they’re taken in by a new owner who can fulfill all the fantasies I had about wearing these dresses. Don’t worry about me … I’ll be fine. I’ll just wait out this season until the cut switches to something a little more flattering.

But learn from my mistake: if you live in NY or LA, check out Madewell. If you don’t have a nearby Madewell, they have part of their collection on the ShopBop website. Check it out. J.Crew may be like that elegant friend of yours who lives in heels and can actually wear a tie-neck dress, but Madewell is her younger sister who, every time you see her, looks effortlessly cool – the kind of deceptive effortlessness which gives you hope that you can do it, too.