Over time, there have been certain catchphrases that have rightfully earned their place on bumper stickers and graphic ts alike. “Make Love, Not War.” “Hugs Not Drugs.” 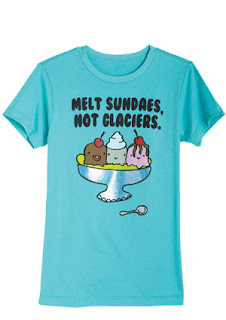 “Melt Ice Cream, Not Glaciers” will not be one of them.

Let’s deal with the obvious, glaring error in this statement: no one should ever let ice cream melt. Ever. Unless you’re six and you still find “soupy” ice cream a novelty.

I’m not saying that letting ice cream melt is a catastrophe on the level of global warming, but … no, that’s exactly what I’m saying.

If the message is that melted ice cream is a fair exchange for melting glaciers – putting melted ice cream on par with catastrophic climate change – then I want a t-shirt that says, “Screw The Polar Bears, Save the Sprinkles.”